Friday night lights have been a tradition at Central High School for over 100 years. After three trips to the state championship, in 2018, the Bobcats football team brought the trophy home to Fountain City. This win was a game changer in more ways than one to the players, the students and the community at Central High.

Jakobi Troutman explained his outlook at the start of the season, “We only made small mistakes that cost us games; such as turnovers,penalties,and bad team chemistry.  If we fixed those, they wouldn´t cost us anymore.” Troutman was right, his fellow teammate Senior Demetrien Johnson would agree, “I was confident, after Fulton and Tennessee High we were not losing any more games.”

These boys knew they made history. ¨We put our school and team on the map,” said Johnson. ¨I never doubted my team, but we did prove people wrong. It still hasn’t hit me.”

These boys put blood, sweat and tears into their season from start to finish.

Central’s  Bobcat Nation was also filled with pride for the players and had faith in them all season.  Senior Cole Rheinecker stated at the beginning of the season, “we’re gonna go 0-2 in Thursday night games and 8-0 in Friday night games,” and he was definitely right.

Senior Kayley Siler shares her thoughts on why this win was most significant to her, “it came at the best possible time, I mean senior year!”

Seniors Taylor Christian, Alexis Hinton, Mackenzie McManus, as well as Siler all shared the same form of justification for this win. They said over these four years at Central, the school had been building up to it as if they were destined to win state their senior year.

Most seniors look back on the previous state championship in 2016, their sophomore year wondering why they did not win. McManus offers her insight into why the team was able to win this year, “well I think we weren’t supposed to win sophomore year.” They truly were saving it for this year which made the win all the more special to the senior class.

This win will continue to impact Fountain City for years to come. Voted most school spirited by her class, senior Bailey Lemmons says, “The team wanted it more than ever, they also just fed off the student section more. This was just the ideal end to the senior football season.”

Elijah Holden  pointed out that, “it was everyone cheering it just wasn’t a few people.” Central has always been a big family. The student section is always there to support the team.  “More people actually wanted to yell ” as Hinton and McManus stated.

This win will be remembered forever for this year’s senior class. When asked what this meant to them answers varied. McManus and Hinton both said they see a lot more togetherness and community that comes with this win,

Central alumni class of 2005, Allison Helton, was a cheerleader in her time as a Bobcat. Her dad, Joel Helton, coached the football team from 1984-2010.

Helton explained what she thought this win meant to Central High School, “there was a lot for JD as Athletic Director and Coach Rosser as a new head coach to overcome in his early years…rebuilding the program and rebuilding how [some in] the community viewed Central High School.”

Allison Helton also adds her thoughts on the team this year,“These young men on this 2018 team have done something no other team has been able to do in 112 years.  Not just winning a much sought after state championship, but I think they have changed an entire community.”

Tommy Schumpert, Central class of 1956, played football and baseball as a student. Schumpert, well known around Fountain City, explained what this win means to him, ¨State Champs gives the whole community pride and tradition about accomplishment. Great accomplishment for the hard work of the players and coaches. Great job cats!”

With Central winning their first championship, this win will pave a way for many more wins in the future. In the words of Head Principal Mr. Reynolds, “We are Central.. We are Bobcat Nation… We are State Champions.” 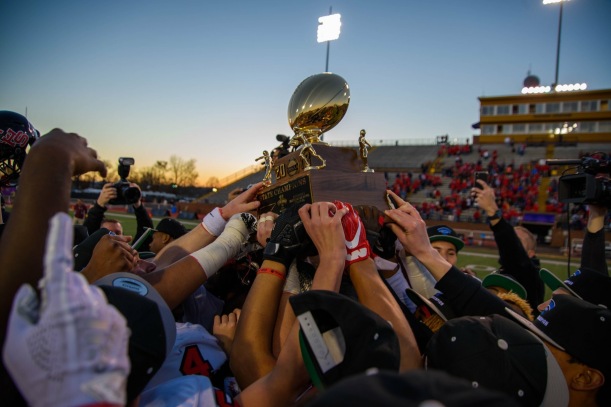