When the first trailer for Rampage came out, people shared mixed reviews about its potential. Some had said it “looks lame” some had said, “oh we get to see how Dwayne Johnson raise a monkey.” The movie overall has a fo 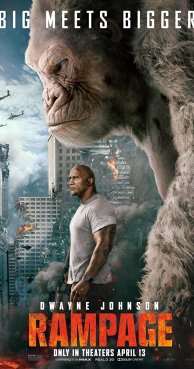 ur star rating from Movie Insider, so that’s pretty good.

Overall, the movie was great. How Dwayne Johnson saved George the gorilla and raised him, and fought other animals that got hit hat turned the animals really big and mutated into into their own kinds but stronger and way faster even new abilities. It was funny, exiting, a little bit of a horror but mostly action.

The movie is categorized as action/horror, but I would personally say action/adventure/comedy. If you like movies like this, you should go see Jurassic World, King Kong, Hercules and Planet of the Apes.